Welcome to a continuation on the regular series on The 94th Minute, called “Starting XI”. This is where I ask various people, who are involved in football in some manner, eleven questions to get to know them better! The first ten questions will differ for each person, but the eleventh and final question will always be:

“Who would be in your all-time, favourite starting XI?”

This is a question where anyone can be put into their starting eleven, whether they are famous footballers, football legends, past or unknown players who had an impact on their childhood, or even players they have played with or coached. Anyone is acceptable in their XI!

The ninth installment of the series is an interview with Callum Howen, founder and contributor to the excellent Welsh league football website, This Is Welsh Football (website: www.thisiswelshfootball.com/). Callum, who is a fervent Aberystwyth Town and Wolverhampton Wanderers supporter, he is also part of the media team at FAW Championship North side, CPD Penrhyncoch. To follow Callum on Twitter, his account can be found HERE. 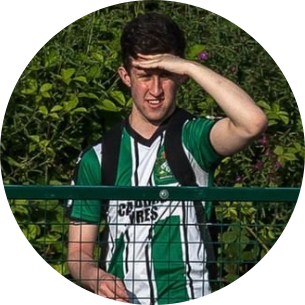 1. Thank you for appearing on ‘Starting XI’! Firstly, what is your first football memory and what encouraged you to follow football?

To be honest, I was never really into football or any sports at an early age. I followed the Welsh national team, but didn’t really pay that much attention to club level. It was Wales’ run in the UEFA European Championships 2016 qualifiers which really got me into loving football.

2. How did the creation of the excellent ‘This Is Welsh Football‘ come about?

3. How do you feel it has progressed so far? Are you surprised at how massive the Twitter account and website has risen in such a short time?

I wouldn’t say we’re massive, haha, but we are a decent size for what we cover. I am surprised though if I’m honest, I thought because of pages like Dai Sport, Y Clwb Pel-Droed and the old Welsh Premier League website, I felt like we didn’t really stand a chance.

4. What have been the best and worst parts of running the account and blog so far?

Best part? Probably when I got to interview Lee Trundle for our YouTube channel when I went all the way down on the bus (god that was a horrible trip) to Haverfordwest.

Worst part? In the early days of ‘This is Welsh Football’, we tended to get stuff wrong. I remember at one point, quite a well known figure in Welsh football told someone he thought we were a fake account, which in all honesty really hurt me. It was at this point I really didn’t feel like TIWF was anything, and nearly decided to shut it down altogether.

5. Have you got any future development plans for TIWF or things you would love to introduce in the future?

I have got lots of future plans. I don’t want to say too much yet though as they might not happen, but ‘This is Welsh Football’ could change massively in the 2020/21 season.

6. What do you make of the situation with Welsh league football currently? Do you think it is in a good position or are you concerned about its future?

I think Welsh football is in the best position it has ever been in at the moment. The rebranding of the second tier is a really good decision from the FAW. To me, the Welsh football pyramid is just growing and growing.

To be honest it doesn’t really bother me either way. Aberystwyth Town‘s pitch is 4G so we can play on it all year round. I’m not really fussed either way.

8. Other than things previously mentioned, what changes would you like to see implemented into Welsh football?

I can’t really think of anything. Maybe a ticketing system simply because I like collecting match day tickets!

9. As it was briefly mentioned previously, as you are an Aberystwyth Town fan, how do you think your season went last season?

Last season was very up and down, I’d say more gutting than anything. Going on that run beating teams like Bala Town and The New Saints, then being smashed by Caernarfon Town and seemingly not being able to win a game cost us. If you asked me if we were going to get ‘Top 6’ last season after the Bala game, I would have given a confident yes! I guess it just wasn’t meant to be.

10. What are you hoping from the Green & Blacks this coming season? What would equate to a good season?

I’d hope we could put on more for a ‘Top 6’ place this season. I think it’ll be tougher though with Cardiff Met University getting their form back. We’ve lost some very good players from last season, but most of the squad from last season has been retained, so we have a good core to build around.

11. Finally, who would appear in your all-time, favourite Starting XI?

A massive thank you to Callum for answering my questions and being a great guest on the Starting XI series! To find out more about the This Is Welsh Football website, it can be found at the following locations:

To read my previous Starting XI episode, where I interviewed the founder and editor of Y Clwb Pêl-Droed, Jordan A Jones, it can be found HERE.

If there you have any feedback, comments or suggestions who I should interview next in the series, let me know either below in the comments box, tweet me @The94thMin or email me at the94thminute@gmail.com! It would be good to hear what you think about the series so far!

In addition, please follow my podcast channel on the following platforms: